Two of America’s foremost non-fiction filmmakers, Albert Maysles and his brother David (1932-1987) are recognized as pioneers of Cinema Direct the distinctly American version of French Cinema Verité. They earned their distinguished reputations by being the first to make non-fiction feature films – films in which the drama of human life unfolds as is, without scripts, sets, or narration. Among their works include Salesman (1968), Gimme Shelter (1970) and Grey Gardens (1976). Maysles received his B.A. at Syracuse and 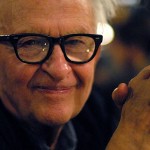 his M.A. at Boston University, where he taught Psychology for three years. He made the transition to film in 1955 by taking a 16mm camera to Russia to film patients at several mental hospitals. The result was Psychiatry in Russia. Several years later, the Maysles brothers made a motorcycle journey from Munich to Moscow and along the way shot their first collaborative film on the Polish student revolution.