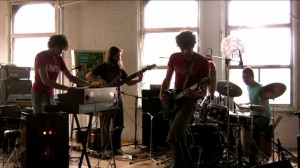 Together for 15 years and having recorded six studio albums, Winnipeg’s Mahogany Frog is one of the best bands you’ve never heard. Alors, t’as soif de quoi? documents the band on stage as well as off as they try to reconcile lofty dreams of rock stardom with an uncompromising need to create music that is decidedly not radio friendly or mainstream. Their special brand of visceral face-melting instrumental psychedelic jazz-rock is the product of an endless love for pushing artistic boundaries and a steadfast determination not to sell out. Set your synths to stun.

Co-presented by On Screen Manitoba