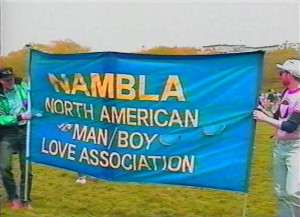 Dubbed “one of the sickest documentaries you’ll probably ever see” by Vice Magazine, the inflammatorily-titled Chickenhawk: Men Who Love Boys is a candid look inside NAMBLA – The North American Man-Boy Love Association – a support group for pedophiles, whose most famous member is likely the beat poet Allen Ginsberg. Adi Sideman’s NYU sophomore project premiered at the NYUFF in 1994 and made national headlines (no doubt aided by the rumour that NYUFF staff got boy scouts to hand out the flyers). Outcast by the gay community, and the subject of pretty much universal moral derision and ridicule by stalwarts of pop culture such as TV’s South Park, NAMBLA members rarely get to speak for themselves openly. And with Chickenhawk, they tell it all.

Please note: While the ideas this film gives voice to may be controversial, there is no legally questionable imagery in this film.