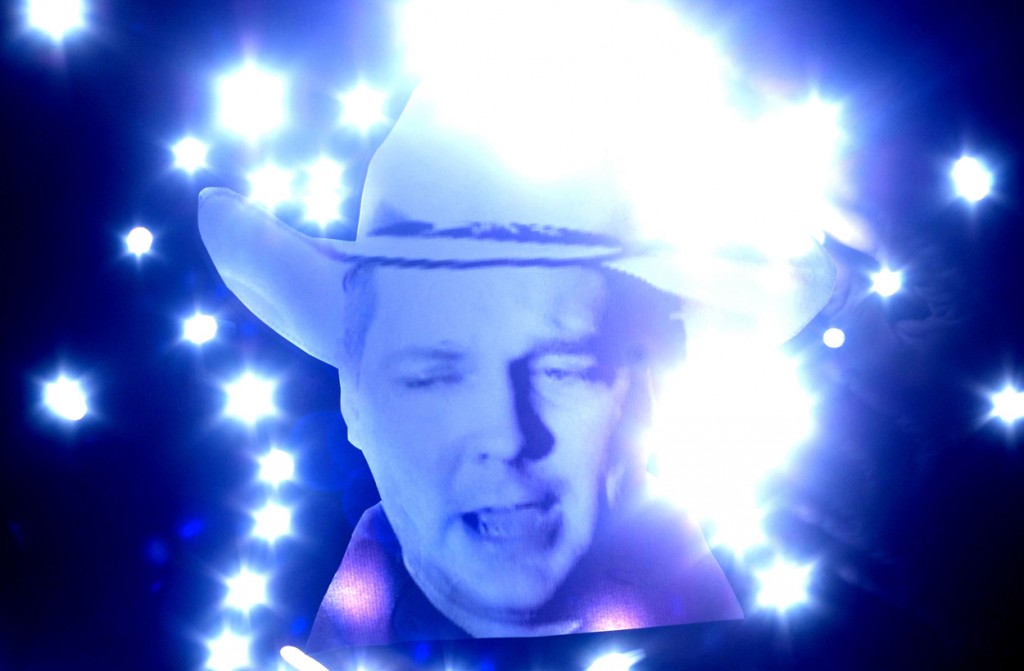 Every so often someone emerges from the Winnipeg film community whose work is so distinctive and crazed that it is clear we are in the presence of a true artist. A magician with found footage and scratch animation and an uproarious storyteller, Mike Maryniuk is the most recent addition in a city blessed with amazing filmmakers. How can you possibly describe his films and do them justice? First, throw your expectations out the door because most of them are filtered thru some kind of weird FUN-O-METER. A secret lens that he attaches to the camera which ensures each film is imbued with 100 % mirth and irreverence. Add scratch animation, handmade props, and a wild imagination and before long this home brew blasts the traditional notion of documentary out the door. And what emerges from all these films is a sense of community with the people of Manitoba.

Whether focusing on yarn slinging women, (Blanketeers) cattle auctioneers (Cattle Call) or hockey icons (The Riverton Rifle) he turns documentary film making upside down. Like the legendary documentary filmmaker Les Blank, Mike has a unique eye for the absurd and a gentle view of humanity. Reflecting hours of detailed work all of his films are inspired from a myriad of sources: a love of Norman McLaren scratch animation, Jim Henson puppetry, and Looney tunes cartoons. They are handmade and stitched together fusing elements of collage art, low fi cablevision and pixilation. This program features everything that Mike does best. From an excerpt from the fictionalized video collage Death by Popcorn: Tragedy of the Winnipeg Jets – about the demise of the NHL’s Winnipeg Jets (made with Atelier National du Manitoba) to his recent portrait of 80 – something guitarist yodeller Stew Clayton in The Yodeling Farmer, created with Janitor/President of Times Change(d) John Scoles.

No film expresses his skills better than Cattle Call his masterpiece made with fellow collaborator Matthew Rankin. This eye popping stop motion documentary about cattle auctioneer Tim Dowler wowed critics and played at over 30 festivals worldwide including Sundance, Toronto, SXSW and the Ottawa International Film festival. The program builds to his latest masterwork, Packing up the Wagon, again made with John Scoles– a lip smacking tribute to the final days of the Winnipeg home of the clubhouse sandwich, the Wagon Wheel. Maryniuk veteran actor Rob Vilar put it best: “Maryniuk is a prairie landfill surrealist, in that there are levels and subversion to his work born out of the discarded and forgotten dream nooks of the prairies. Some spectacle, some horror, some humour, but always filtered through an engaging and tense flowing Manitoba lens.”

*Some material in this article is excerpted from a piece on Mike Maryniuk originally written for INCITE! Journal of Experimental Media and Radical Aesthetics.

Death by Popcorn
By L’Atelier National Du Manitoba
(2006, 3 min excerpt, Canada)
Peppered with action packed cameos by Winnipeg All Stars Dale Hawerchuk, Burton Cummings, Teemu Selanne, Billy Van and a recent interview with the man who sent the jets straight into the jaws of death by throwing a cataclysmic box of popcorn onto the ice in Game 6 of the 1990 playoff series, Death By Popcorn follows the ill fated jets through their many travails. In this excerpt Mike rearranges footage of a local sports casting celebrity to great comic effect.

Cattle Call
By Mike Maryniuk and Matthew Rankin
(2008, 3.5 mins, Canada)
A high-speed animated documentary about the art of livestock auctioneering. Structured around the mesmerizing talents of 2007 Manitoba/Saskatchewan Auctioneer Champion, Tim Dowler, and using a variety of classic and avant-garde animation techniques.

The Blanketeers
By Mike Maryniuk
(2010, 4 mins, Canada)
A wonderful group of yarn slinging women assemble weekly to gab and knit blankets for charity.

The Last Milkman
By Mike Maryniuk
(2010, 5 mins, Canada)
The Last Milkman in Winnipeg delivers more than milk, he provides a healthy dose of friendliness, levity and fond memories.

Works in Progress: Two Excerpts
(5 min, 2013)
Mike is hard at work on so many great projects that we have lost track…but here is a quick sneak peek at two.

Packing Up the Wagon: The Last Days of Wagon Wheel Lunch
By Mike Maryniuk and John Scoles
(2013, 25 mins, Canada)
Wagon Wheel Lunch is a time capsule of days gone by. Famous for the culinary crown jewel of Winnipeg’s THE WAGON WHEEL’S CLUBHOUSE SANDWICH. By letting the restaurant be torn down, Winnipeg has severed its ties with the past, divorced itself from its history and forced its citizens into a future of TGIFriday’s and Tim Horton’s Bagel BELT’s. This documentary film chronicles the last days and destruction of the iconic restaurant.

Sponsored by MTS Stories from Home and On Screen Manitoba