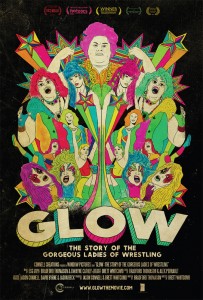 GLOW: The Story of the Gorgeous Ladies of Wrestling

In 1986, one year after the original game-changing WrestleMania event, the Gorgeous Ladies of Wrestling became the first ever all-female TV wrestling show. Like their counterparts at the WWF, the GLOW girls – almost all actresses and models hoping for a big break – adopted exaggerated character types and costumes, acted in ham-fisted comedy skits, performed personalised rap songs and beat the living daylights out of each other, all in good fun. By 1989, the women of GLOW were an international phenomenon, attracting millions of viewers, touring the country and making big bucks for the show’s producers. And then, without warning, the series was cancelled. Whitcomb and Thomason’s film has camp and heart in equal measure; it traverses the highs and lows of GLOW’s brief existence, from the cattle call-style auditions and through training to the championships, capturing an adorable cast of characters for whom GLOW was a live-altering experience.