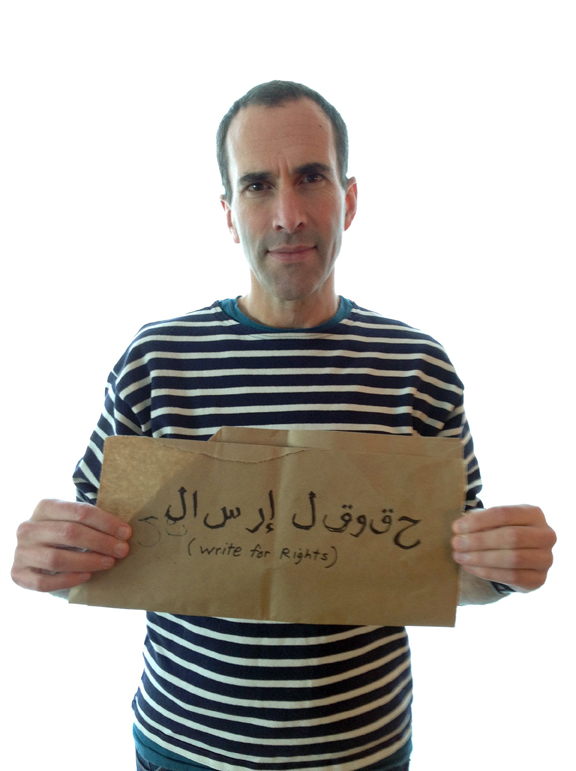 Launched to international recognition in 1993 with his provocative AIDS musical Zero Patience, Toronto filmmaker John Greyson established himself as a leading figure in the loosely defined New Queer Cinema movement of the early 1990s. In an extensive body of work that ranges from documentary and historical fiction to filmed operas and experimental video art, Greyson employs Brechtian methods to refashion well-worn cinematic tropes as instruments of social and political activism, engaging the audience critically while never forgetting the power of pathos, humour and sensuality in telling his stories of forbidden love and struggles for recognition and liberation. – TIFF Cinematheque / Impatient:  Retrospective of John Greyson:

This program will highlight a selection of John Greyson’s earliest and most recent short video works that demonstrate his decades long commitment to address human rights struggles. Whether it be Russia’s treatment of gays in the 80’s to Bosnian chemical warfare in the 90’s, the issues he raises remain urgent and relevant today as ongoing human rights offences. To define his work as activist video would marginalize the aesthetic qualities that make the videos so cinematic, while satirically reinterpreting the conventions and readings of Hollywood feature films. As B. Ruby Rich notes “His oeuvre is an incendiary blend of five essential elements: humour, music, history, desire, and socio-political outrage.” His recent detention in Egypt en route to Gaza has raised his public profile, but watching his videos is the best way to directly connect with Greyson’s politics. No one program could be comprehensive in representing his body of work, let alone acknowledging all of Greyson’s efforts outside of filmmaking, yet his consistent voice fighting for human rights remains a constant in all of his videos. – Alex Rogalski 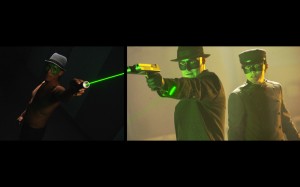 This is Nothing / Directed by John Greyson, 1999, Canada, 8 min / Dimitrije in Belgrade sends daily emails to Jack, describing life in the shadow of the NATO bombing campaign. At night in Toronto, Jack dreams that he’s a CIA operative, assigned to assassinate antiwar theorist Noam Bombski. (VTape)

Covered / Directed by John Greyson, 2009, Canada, 14 min / In September, 2008, the opening ceremonies of the first Queer Sarajevo Festival were closed down by a violent mob, who accused the organizers of blaspheming the holy month of Ramadan. Eight people were hospitalized, and the rest of the festival was cancelled. This experimental documentary profiles the courage of the four women who organized the festival, and explores the complex politics that inform contemporary Bosnian society, still struggling with the demons of the brutal 1992-95 war. A counter-narrative uses excerpts from a Susan Sontag essay to critique the peculiar subculture of youtube cover versions, and the ubiquity of bird imagery in pop songs. (VTape) 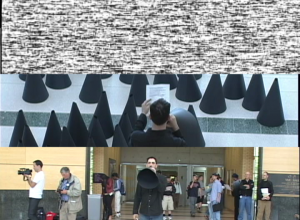 Motet for Amplified Voices / Directed by John Greyson, 2004, Canada, 5 min / On April 30th, 2004, York student and peace activist Dan Freeman-Maloy was suspended for 3 years for using a megaphone on campus. In a protest two weeks later, an impromptu megaphone choir performed the composition “Motet for Amplified Voices”, with over 50 megaphones. The singers juxtaposed various quotes: headlines about Israeli raids in Rafah; poems by Auden, Darwish, Beissel; quotes by Said, Benjamin, Arendt, and statements by the York President and Freeman-Maloy. (VTape)

PILS SLIP / Directed by John Greyson, 2003, Canada, 5 min / An operatic palindrome concerning the fight for AIDS treatment drugs in South Africa. “No devil is as selfless as I lived on.” (VTape)

Moscow Doesn’t Believe in Queers / Directed by John Greyson, 1986, Canada, 27 min / The tape serves as a diaristic account of representing a gay organization at the Moscow Youth Festival in August, 1985, while addressing the problems of linking sexual politics to a critique of Soviet socialism. (Vtape)

Prison Arabic / Directed by John Greyson, 2013, Canada, 5 min / During their 50-day detention, John created these flash cards as a diary of their experiences. This video is dedicated to the many who spoke out for their release, and for the many who are still behind bars. (tarekandjohn.com)

Presented in partnership with the Canadian Museum for Human Rights, Spur and the National Film Board of Canada