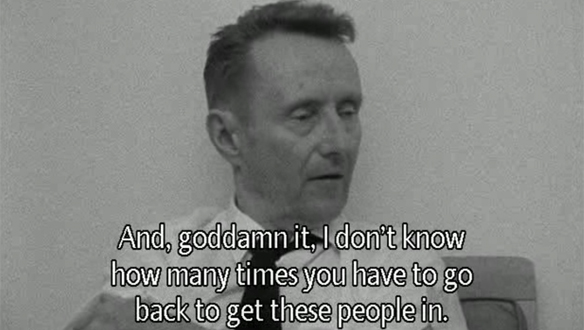 Salesman follows four door-to-door Bible salesmen as they walk the line between hype and despair. Paul “The Badger” Brennan, Charles “The Gipper” McDevitt, James “The Rabbit” Baker, and Raymond “The Bull” Martos, are so nicknamed for their particular selling styles — on their rounds. First making calls in and around Boston, where the company is based, then in Chicago at a sales conference, and finally in the promising new “territory” of Miami and vicinity. Their mission is simple: to convince people to buy what one of them calls “still the best seller in the world.”

But although their customers are mostly middle, working-class Catholics recommended by the local church, the Bible is a hard sell. In action, the salesmen rely on trusty catch phrases: “Could you say if this would help the family? Could you see where this would be of value in the home? A gain to you?” Talking, pushing, cajoling, telling jokes and stories, throwing out compliments, the salesmen make their “pitches” to a wide range of customers — lonely widows, married couples, Cuban immigrants, bored housewives — from those who clearly cannot afford the $50 book to those who, in the end, are convinced by the salesman’s somewhat too-cheerful patter.

From Webster, Massachusetts to Opa-Locka, Florida, the operating costs of the American Dream. Today Salesman is considered ‘the direct cinema classic’.