Animation filmmaker Shira Avni has been creating animated shorts with the NFB since 1997, and is currently an Assistant Professor of Film Animation at Concordia University’s Mel Hoppenheim School of Cinema. She holds an MFA in Film/Video/New Media from the School of the Art Institute of Chicago. Avni’s films addres 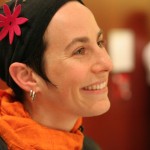 s questions of disability, sexuality, bereavement, and social justice in ways that gently break down the viewer’s habitual barriers. Avni’s films Tying Your Own Shoes, John and Michael and From Far Away, produced with the National Film Board, have garnered over 30 grants and awards, including the prestigious DOK Leipzig Golden Dove and the NHK Japan Prize. The films have screened in over 100 festivals worldwide, as well as on CBC, PBS, and TV5 television networks. She is currently in production on the film Petra’s Poem, a 3D stereoscopic collaborative animation/live action hybrid experimental piece, written by, and choreographed in collaboration with Petra Tolley, an artist who has Down syndrome, and performed by a dozen performers who have Down syndrome and other special needs.