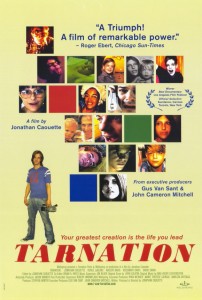 Part documentary, part narrative fiction, part home movie, and part acid trip. A psychedelic whirlwind of snapshots, Super-8 home movies, old answering machine messages, video diaries, early short films, snippets of ’80s pop culture, and dramatic re-enactments to create an epic portrait of an American family travesty. The story begins when Jonathan learns that his schizophrenic mother, Renee, has overdosed on her lithium medication. He is catapulted back into his real and horrifying family legacy of rape, abandonment, promiscuity, drug addiction, child abuse, and psychosis. As he grows up on camera, he finds the escapist balm of musical theater and B horror flicks and reconnects to life through a queer chosen family. A look into the future shows Jonathan as he confronts the symbiotic and almost unbearable love he shares with his beautiful and tragically damaged mother.

Presented in partnership with the National Film Board